Shortly before their concert, I had the chance to chat with Matty Healy from The 1975 and talk about their new album “I Love It When You Sleep, For You Are So Beautiful Yet So Unaware Of It”, the new style and about their future plans. I was greeted by the whole band, chilling in the smoker’s lounge. Then, Matty offered me a seat right next to him on the sofa (yes, my heart stopped for a moment) and he started talking to me while smoking cigarette after cigarette.

What was the reason behind reusing the debut album cover for “I Love It When You Sleep For You Are So Beautiful Yet So Unaware Of It” and deciding to re-record the intro track, but this time with a choir?
There’s no particular reason, I just want everything that we do to be us. Keeping the same form, the same box but changing the colour was basically what we wanted to do musically. It’s an evolution but we also want to stay true to what we are. Kind of a representation what we were doing musically, staying the same but changing some colour. With the intro track it’s actually the same, it’s for creating a continuity. I wanted, that every time you put in one of our records, you instantly know that it’s a 1975 record because it’s always the same song. I think we’ll always do that in the future.

What’s your favourite song on the new album, do you have one?
Do you? I think it’s quite difficult, there are 17 completely different tracks on there. I mean, there is a song about my Nana’s death, there’s a song about my mum’s postnatal depression, there’s also a song about having fun in America. You know, there’s different songs for different times, which makes it hard to pick a favourite. That’s why it’s 17 tracks, I can’t even stay in one genre in one song, let alone an album – so how could I pick a favourite? But I love all of them, like “Somebody Else” is probably my favourite at the moment.

Parts of the song “Lostmyhead”  have been in an other song called “Facedown” from your first EP. How long has this track existed and are there other songs that have been around for a while?
Well on the current album, there is one song that already existed before, “The Sound”. It was written in 2011, I think. “Lostmyhead”, was when we were still a band called “The Big Sleep”. I had a week in my bedroom and I made this little weird record and it was “Lostmyhead”, the original version of “Medicine” and some other stuff. So “Lostmyhead” was actually the first 1975 song ever written because I called that project 1975.

Are there any other old tracks to be re-released?
We’re already working on the new record, so there will probably be some stuff. About the new album, I think we will be putting out a new song next summer as a single probably, which will be followed by a record. We might do some remixes, but it’s gonna be us that remix it, we don’t want to give it to other people. There are a few side projects too, but that’s not for us to release. It’s mainly gonna be us working as producers for other people, so that’s up to the artists to release.

If there was a single song that people, who aren’t familiar with your music, should listen to as the best representation of the band or yourself, what song would that be?
Well that’s a good question, but I think you could answer that better than us as the band. We stand for being genreless, we stand for this generation, we stand for creating in the way that we consume. So the whole point is, you can’t put us in one song. But if I had to, I think “Change Of Heart” is my favourite at the moment. When I show people what I’m about at the moment, I’d play them that.

If money was no object, where would your dream-The 1975-show take place?
I’d love playing the Royal Albert Hall, but unfortunately money is an object and it’s so expensive that you lose money when you play there. But you know what? Actually, we are very lucky to be a band that all the venues that I’ve ever dreamt of playing we’re just about to play. We already played Hyde Park supporting the Rolling Stones. So we’re actually already there where we want to be and that’s awesome. Now that I think about it, St. James’ Park would be awesome, that’s where my favourite football team plays. We want to play there next summer, we’re trying to do this soon.

How did you go from the picture on the left to the one on the right?

Matty laughs and shows the pictures to the other band members before answering.

From Matt Healy to David Savage. This is my character David Savage, David Bowie meets Lily Savage. When you’ve been doing it for a while you just get bored, don’t you. What does piss me off is when you put make up on people and then you hear “ohh gendernorms” or that I’m trying to be subversive. People in bands have been wearing make up for such a long time, it shouldn’t be special anmore. For me, it’s just like putting different shoes on, it’s just part of the outfit. It’s not that I’m trying to be progressive, come on, it’s 2016. And what made me change? I just got bored of being a boy, so I went on being a girl for a bit.

What do you think about that, all that buzz about genderfluidity and all that stuff?
Well, it’s nice that we have such an awareness now and it’s so in people’s minds. But like…what? David Bowie, Marc Almond, Marilyn Manson…it’s not a new thing. It’s different, if there are young people that listen to my band and it’s the first time they’ve seen people do that, I understand if it’s something special to them because you don’t see One Direction or Catfish and the Bottlemen wearing make up.

Will there be a repressing of the Milk vinyl? It’s probably your most requested vinyl.
Maybe, probably… but I didn’t know that it was so requested. Well then no, because it makes the other ones more special and valuable. If we printed loads of it, no one would care. I’d rather have people care about something. It’s like Furbies – I wanted one for Christmas because everyone had one. Then I got one at Easter and I didn’t give a fuck anymore.

Any plans for Antichrist to be played on the new tour?
Fuck, you’re a proper fan, aren’t you (laughs). Yes, we actually do, I’m writing the look at the moment because all the songs have a particular look. And when we get the look, we have to force ourselves to play it live. We will play it live, I promise – but not for a while

Why do you have to force yourselves? Isn’t it fun to play?
It’s a fucking nightmare to do it. We wrote and recorded that song in 2011 on different laptops, all in England and all of the parts are on different harddrives. To learn it, it’s fine. But to be able to play it live, it’s gonna be a nightmare. But we’ll figure it out.

How do you and George produce your music? What do you do before going into the studio?
We kiss, for like 35 minutes, then we play Badminton. And then we get into the studio.

Since you played last in Zurich in 2014, what has changed?
We’re playing the same venue, so fucking nothing has changed apart from my hair (laughs). I think people are really gonna be into this show, because it’s the first time we’re coming back as a “big” band. We’re really excited about it, because we didn’t have a proper show here before.

Last but not least: How do you style your hair?
I am very fortunate, that this is my hair. This is like default-hair. I do very little with it, I put a bit of mousse in it to enhance the curls but that’s all.

Any plans for the next haircut?
Yeah, I actually have been thinking about that lately. But my hair holds a lot of currency at the moment and this is my hair now. I’d lose all my vibe without my hair, so I couldn’t do that now. 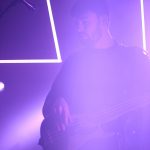 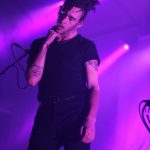 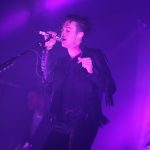 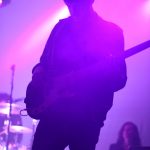 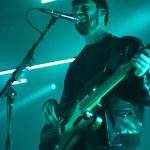 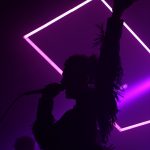